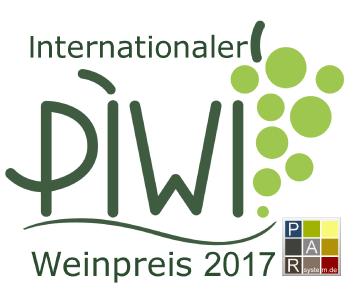 (lifePR) ( Bad Dürkheim, 02.11.17 )
The climatically challenging wine year 2016 was the perfect one to demonstrate the brilliance of the young fungus-resistant varieties called PIWIs. The jury of the seventh International PIWI Wine Award judged the ability of these resilient vines and its ever-expanding diversity to deliver the top quality wines. Mr. Martin Darting, Head of PAR®-Team, was pleased to taste 339 PIWI wines produced in 14 countries. The most successful ones were decorated with medals: 18 Top Gold, 133 Gold, 142 Silver. Two red wines as well as one white and sweet wine each shared the 98 PAR points top rating position this year: the 2015 Regent Auslese Barrique from Weinhof Winter, Saale-Unstrut, the organically produced 2015 Regent Auslese Barrique from Hofgut Sonnenschein, Baden, the 2016 Solaris from Tenuta Baron Longo, South Tirol and the 2016 Solaris Trockenbeerenauslese „Friedelsheimer Schloßgarten“ from Vier Jahreszeiten Winzer eG, Palatinate region. The official awarding ceremony will take place during the big public tasting „Weinkost Weinstadt“ on the 18th of November 2017 in the Jahnhalle Weinstadt close to Stuttgart.

Top Gold for Switzerland, Germany, Austria, Italy and Poland: It was as though the winemakers cultivating Regent variety wanted to honour its 50th anniversary; this PIWI vine appeared to be a notable success. Hence two further „Regents“ closely followed both frontrunners with 97 PAR points: the 2016 Regent trocken from Organic Winery Hemer, Rhinehessen, and 2015 Regent trocken from wine-growing estate Egon Schmitt, Palatinate region. Likewise, the 2016 Maréchal Foch matured in an oak barrel at organically farming estate Geiger from Switzerland received 96 PAR-points achieving the Top Gold Position. While the single-variety products prevailed among the Top Red Wines, the Top Gold White PIWI League also presented a Cuvée - the 2016 „Triengler Gaukler“, a blend of Muscaris, Muscatin and Solaris from winery Barmet based in the Central Switzerland. The best White from Austria was the organically grown 2015 Blanca-Souvignier coming from Ploder Rosenberg, Styria, honoured with 96 PAR points. The 2016 Johanniter Eiswein from Winnica Turnau, Poland, scintillated with 96 points in the category of „Dessert Wine.“

A bounty for the quality-minds: Features observed during various international competitions with mainly classical grape varieties also apply to fungus-resistant cultures. Martin Darting said: „Due to its easy use and reliable resistance characteristics PIWI can be a large-scale producer. Unfortunately, such wines showed only weak results. Those who committed to quality, for instance, using yield reduction or omission of the leaf removal, could produce minerally dense and extremely sophisticated aromatic wines equipped with a bounty of medals.“

When looking at the success stories of the certain varieties, it becomes obvious that along with the well-established varieties like, for instance, the white Solaris or red Regent, the emergent grape types like Cabernet Blanc, the young PIWI CAL 6-04 or Merlot Kanthus are increasingly gaining pace. „Under the condition of yield reduction, Cabernet Blanc, which has been awarded 16 Gold medals in 2017, is about to turn into a terroir reflecting wine, full of finesse and very similar to the Sauvignon Blanc. The increased experience of winemakers with the variety becomes obvious.“, Martin Darting continued. „Innovation on the one hand and excellent performance of skillfulness on the other also convinced by the „Reds“. Cortis, Carol, Jura and Carbon from Cabernet Family known for an element of distinct aroma dominance experienced serious competition through VB91-26-04, Pinotin and Merlot Kanthus.“

Similar to the previous year, not only known European wine countries delivered the prime quality. Also, the „Northern Lights“ like Denmark, Sweden, Belgium and the Netherlands, as well as Poland and the Czech Republic took advantage of PIWI benefits and received the top rating.

Big public wine tasting „Weinkost Weinstadt“ will take place on the 18th of November 2017 in Jahnhalle close to Stuttgart. This event is the perfect opportunity to learn more about the quality and diversity of the PIWI wines. PIWI International will present the winners of the International PIWI Wine Award at 3 p.m. www.weinkost-weinstadt.de

PIWI International Wine Award: Initiated by PIWI International and organised by WINE System AG, this prestigious competition capitalises on highly recognised PAR tasting method. Due to an analytical and differentiated approach of specifically trained PAR tasters, all aspects of winemaking and climatic conditions are taken into consideration in the assessment of wines. The results are objective and transparent in every detail. PIWIs were bred as fungus-resistant grape varieties to protect winegrowing against diseases like Peronospora and Oidium, also called downy and powdery mildew, and to keep the use of fungicides to a minimum. PIWIs often described as a “robust vine”, manage almost to dispense with plant protection creating an environmental and economic profit. Despite a tough wine year 2016 with a high fungal infestation, PIWI winemakers could work way more relaxed and ecological than the colleagues cultivating common grape varieties.

Assessment with PAR®: - thanks to the transparency of the internationally recognized sensory testing system PAR, each submitted PIWI wine receives a replicable and objective documentation of its sensory and oenological characteristics, always assessed authenticity and style respectively. The PAR training enables the qualified jury consisting of oenologists, sommeliers and wine experts (certified by the German IHK) to assess each wine neutrally, excluding personal preferences or preconceived opinions regarding “good taste.” In the context of modern enology, new international wine styles experience appreciation and acceptance also in PAR assessment. Besides attracting attention brought by this award, many producers appreciate the revealing analyses underlying the PAR assessment. They show exactly which criteria have led to respective results and provide valuable documentation for the quality management. This system ensures an objective assessment with 100-point-pattern based on replicable documentation.

PIWI International e.v Association promotes the information exchange between research organizations, growers, refiners of PIWI grape varieties and wine producers. Many fungus-resistant grape varieties have been put into practice during the last years, some of them on a trial base. There is a big information demand about this type of grape, namely detailed feature characterization, manual for the best possible winemaking, degustations, marketing exchange and how to better inform final consumers. Besides arranging of congresses and study groups, the initiation of the International PIWI Wine Award is an essential part of the PIWI activities. President: Josef Engelhart - Office: Susanne Sommer 06133-5099226 info@piwi-international.de 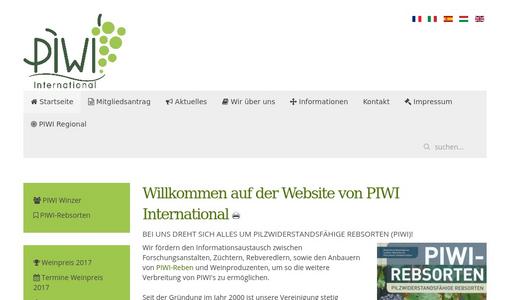 Pressemitteilung "2016 was the year of PIWIs!" weiterempfehlen