Publication of the second quarter results 2015 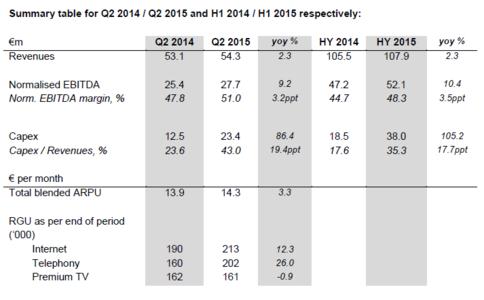 (lifePR) ( Berlin, 14.08.15 )
Tele Columbus Group (“Tele Columbus” or “Company”), the third largest German cable network operator, continued to deliver on its success story in the second quarter of 2015. Revenues in the second quarter of 2015 increased by 2.3% year on year to EUR 54.3 million. Compared to a high normalised EBITDA of EUR 25.4 million in the previous year’s second quarter, the Company again showed significant growth of 9.2% year on year to EUR 27.7 million in Q2 2015, generating an EBITDA margin uplift of 3.2ppt to 51.0% (47.8% in Q2 2014). With capital expenditures of EUR 23.4 million in the second quarter, Tele Columbus was able to increase the number of households connected to its own two way fully upgraded network to 955,000 which is an increase of 15,000 compared to March 2015.

“Tele Columbus continues to successfully deliver on its growth strategy: For the second quarter of 2015, we report 2.3% top line growth paired with strong EBITDA development”, says Ronny Verhelst, CEO of Tele Columbus. “We have good traction in our new product offerings which confirms that we are successfully meeting the needs of our customers and partners in the housing industry. Our progress to date has been driven by our high-performance infrastructure and highly competitive product portfolio. Going forward, we see our development moving to the next level by joining forces with primacom and maximising the potential of our combined platform.”

In the second quarter 2015, Tele Columbus was able to increase its homes connected base by 9,000 to 1.68 million on the back of the acquisition of several smaller cable network operators which more than compensated the terminating housing industry contracts in the reported quarter.

In May 2015, the Company successfully migrated 22,000 Internet-only customers with low broadband speeds onto double flat products with minimum 16 Mbit/s. Given the attractive Internet and Telephony product portfolio, the churn on the migrated customer base was kept to a minimum. This underpinned the increase in telephony RGUs by 27,000 to a total of 202,000, up 15.3% quarter on quarter or 26.0% year on year. Based on this customer migration, the bundle rate increased to 82.7% at the end of June 2015, significantly up from 73.0% at the end of Q2 2014.

Overall, the Internet & Telephony business continued to be the growth engine of Tele Columbus generating revenues of EUR 15.1 million in the second quarter, reporting 20.3% growth year on year.

“In the second quarter of 2015, we were again one of the fastest growing cable companies in Europe with normalised EBITDA growth of 9.2% year on year. In addition, we are very pleased to report the positive net profit of EUR 5.0 million for Q2 2015”, says Frank Posnanski, CFO of Tele Columbus. “Tele Columbus strengthens its position as the number 3 cable player in Germany with the acquisition of primacom which has a growth and development strategy that is very much aligned with Tele Columbus’ strategy.” primacom will be consolidated into the Tele Columbus group from 1 August 2015 onwards.

In April 2015, Tele Columbus launched an internet offering with download speeds of up to 400 Mbit/s in its city network of Potsdam and reached a new record high in the German consumer market. A roll out of the service to further regions is planned.

In May 2015, Tele Columbus stopped selling its Internet only product with speeds of less than 16 Mbit/s. The customers were offered new bundle Internet and telephony products with broadband speed of 16 Mbit/s or more.

In May 2015, for the first time the Company launched business tariffs based on its 50 Mbit/s and 150 Mbit/s retail customer products.

In June 2015, the Company launched two pilot Wifi hotspots in Halle/Saale to test the Wifi opportunity.

On 22 June 2015, Tele Columbus AG was included in the SDAX index of Deutsche Börse, Frankfurt.

On 6 August 2015, Tele Columbus announced that it will host an EGM on 14 September 2015 in Berlin. Tele Columbus plans to conduct a rights offering with pre-emptive rights of targeted EUR 240 million to finance further acquisitions thereby the maximum number of new shares shall not exceed the existing number of shares.

Confirmed guidance for the full year 2015

In view of the investment requirements over the next years for both companies and in view of increased leverage, Tele Columbus does not expect to propose a dividend for fiscal year 2015.

Please be informed that TC Management S.à r.l., a shareholder owning 10.15% in Tele Columbus AG, will be liquidated at the end of August 2015. Shares will be transferred to individual shareholders. This action will increase the free float of the Company to close to 100%.

The SDAX listed Tele Columbus Group is one of Germany's largest cable network operators. Via its origins - individual regional cable network operators that were merged into Tele Columbus - the company dates back to 1972. About 1.7 million connected households in Germany use Tele Columbus' TV signals and, increasingly, digital broadcast packages, Internet and voice connections provided via high-performance broadband cable. As a national provider with a regional focus and a partner of the housing industry, the Group is present throughout its core markets Berlin, Brandenburg, Saxony, Saxony-Anhalt and Thuringia as well as in numerous key regions in western Germany. In tune with current demand trends, the company is upgrading its networks in a hybrid fibre-optic infrastructure for superfast Internet connections of up to several hundred megabits per second with the state-of-the-art Internet transmission standard DOCSIS 3.0. The broadband cable caters to the entire range of innovative media applications from analogous, digital and high-definition TV to high-speed Internet and voice connections to telemetry services, tenant portals and interactive services. Beyond merely transmitting signals, Tele Columbus uses its own product platform in order to actively increase the programme offering and to develop additional services.