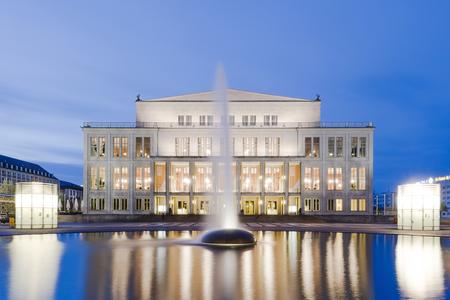 (lifePR) ( Leipzig, 17.07.20 )
The Oper Leipzig schedule of events for the 2020/21 season will once again allow for performances on the main stage, as part of an ambitious hygiene plan. The Oper Leipzig’s season-opening concert is entitled “Vorhang auf!” and will take place on September 12, 2020. Intendant and general music director Ulf Schirmer will musically direct the program, which will include works by Mozart, Rossini, Carl Maria von Weber, Bizet, and Humperdinck. The very next day on September 13, soprano Gabriele Scherer will take the stage with her husband, superstar baritone Michael Volle, as together they perform selections from the works of Richard Wagner and Richard Strauss an 60 Musicians of the Gewandhaus orchestra on stage.

In line with health regulations, the Oper Leipzig’s theater will offer 238 seats, and the Musikalische Komödie’s current venue allows 48 seats. Both venues will offer one-hour performances without an intermission and will observe distancing regulations in the front and back of the house, and on stage.

Ulf Schirmer thanks all involved in this complex process of coordination: “I am very grateful to the artists, and to our planning and technical teams, both on stage and behind the scenes, for their engagement, their patience, and their creativity. Thanks to them, we are able to make resolute and imaginative decisions regarding this autumn’s new schedule of events.”

This musical by Gerhard Kneifel leads us into the world of a traveling theater at the turn of the last century. First performed at the Metropol Theater in Berlin in 1970, this musical humorously draws on the oftdramatized Abduction of the Sabine Women in a version by brothers Franz and Paul von Schönthan. Librettists Helmut Bez and Jürgen Degenhardt – who also wrote the text for Gerd Natschinski’s Mein Freund Bunbury – skillfully parody both the story’s thieves and the German petit bourgeoisie simultaneously. This musical about appearances and reality is a key work in the musical history of the GDR, with musical styles ranging from Schlager, chanson, waltz, rock, and ragtime. Principal director Cusch Jung is also the commentator in the specially created stage version of Bretter, die die Welt bedeuten.

Inspired by a line from Fledermaus “Glücklich ist, wer vergisst, was doch nicht zu ändern ist” (“Happy is he who forgets that which he cannot change”), the Oper Leipzig ensemble takes the opportunity to approach the current situation with a dash of humor. For who can hear Don Giovanni’s line “Give me your hand, my life,” (from Mozart’s opera of the same name) these days and not think twice…? The hoop skirt might just be able to make the fashion comeback coup of the year, as the perfect social distancing regulator. And with its expansive side hoops, this “crinolissimo” has the added benefit of discreetly pushing away unwelcome competitors. This entertaining operatic revue, featuring the Gewandhausorchester and the audience’s favorites from the opera ensemble, will be arranged for the stage by opera director Franziska Severin.

Mario Schröder and his ensemble will present a new ballet evening with music by Johann Sebastian Bach and Galina Iwanowna Ustwolskaja. This choreographic premiere will feature the Gewandhausorchester in a chamber orchestra formation on the stage, and will be conducted by Intendant und general music director Ulf Schirmer. In flash-like episodes, the Leipzig Ballet poses the question of the tension between involuntary loneliness and self-imposed moments of solitude.

There are also plans for a further gala concert. The evening will feature classics from the Italian operatic repertoire, featuring top-notch guests such as tenor Tenor Gaston Rivero or soprano Karah Son. Entitled “Nessun dorma,” the curtain will rise on this gala for the first time on September 25, 2020 – as well as on three subsequent dates – under the musical direction of Matthias Foremny. The gala will feature beloved arias, duets, and scenes from famous operas by Donizetti, Verdi, and Puccini. There are also further performance formats taking the stage at the Oper Leipzig that have the pandemic to thank for their existence, but whose dynamic and charm make them convincing: Die Zauberflöte will be performed at the Oper Leipzig in a brand-new, shortened version, featuring all of the best-loved characters and musical numbers. In addition to familiar musical salons in the Konzert Foyer, September and October will feature a number of “Blind Dates” on the main stage – musical programs announced on short notice that will be full of surprises.

In August, the Musikalische Komödie will celebrate the end of its year-long residency at the Westbad. The move back into the renovated and converted Haus Dreilinden is planned for November. On September 13, the nationwide annual open house day at monuments, the Musikalische Komödie invites you to their very special Open Construction Site, starting at 10am. In addition to the musical premiere mentioned above, the operetta gala “Wenn Liebe erwacht” (“When Love Awakens”) has been created for this autumn, presenting excerpts from three unknown works by Robert Stolz, Franz Lehár, and Eduard Künneke. All three operettas are from the year 1920, meaning all three will celebrate their centenary this year. As a farewell and in thanks to the Westbad, the Musikalische Komödie will create a surprise evening under the title “Alles, was geht” (“Anything goes”): on October 9, 10, and 11, 2020 the ensemble will perform for the last time in the Westbad.

The Oper Leipzig will adjusts its events to meet hygiene regulations currently in force. As a result, only the schedule of events for September and October is currently binding. Further decisions can only be made once the new season has begun. The current event schedule for September and October can be found online at www.oper-leipzig.de. Information regarding scheduling for November and December will be provided in early October. The systematic implementation of the hygiene plan and compliance with distancing regulations in the front of the house, as well as on stage and backstage has priority at the Oper Leipzig. As a result, only 238 seats are currently available in Oper Leipzig’s auditorium; at the Westbad, the Musikalische Komödie’s temporary venue, there are 48 seats. All performances are scheduled for one hour without an intermission, and without the use of the orchestra pit. Masks that cover the mouth and nose are mandatory but may be removed once guests have reached their seats.

Advance ticket sales online and at the Opera House box office starting immediately, and during the summer break

The Oper Leipzig’s Visitor Services will be happy to explain details regarding reservation procedures, as well as pricing details for time- and capacity-limited performances. Advanced ticket sales for September and October will continue during the summer break. This summer, however, the Oper Leipzig’s box office hours will change to a core opening time of 10am to 3pm, Monday to Friday, from July 20 to August 30, 2020. During this time, you can contact Visitor Services in person at the Augustusplatz or by telephone at 0341 1261 261.