The KNAUS "Raptor's" first appearance in the DTM: Start of an exciting season 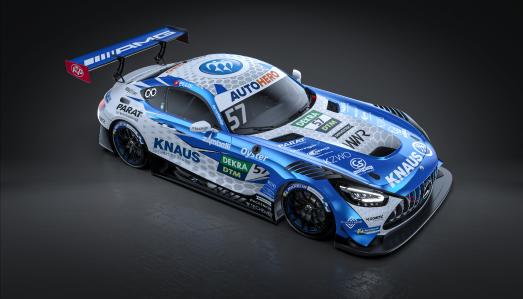 The 2021 season of the demanding DTM racing series will start in Monza in northern Italy this coming weekend. First appearance in this popular super league: The Mercedes-AMG GT3 of Team WINWARD in the bright blue, unmistakably strong KNAUS design - immediately recognisable by the catchy lettering and logo with the double swallows. The unmistakable racing car with its extremely striking front has more than earned its nickname "Raptor".

At the start of the new season, fans around the world are are tensely awaiting the further developed DTM. Thanks to a revised set of regulations, the top series has now opened up to race cars of the GT3 category. This means that the KNAUS "Raptor" Mercedes-AMG GT3 can start in an extremely demanding field. Other competitors such as the Audi R8 LMS GT3, BMW M6 GT3, Ferrari 488 GT3 Evo, Lamborghini Huracán GT3 Evo and McLaren 720S GT3 will also be fighting for podium places in the races, which each last 55 minutes plus one lap. Another change in the regulations takes effect with the new season: The field will no longer start from a standing position, but will open the race directly after the formation lap with a flying start. The many big names new to the DTM promise an extremely exciting season with many emotional, hot race weekends. KNAUS is again relying on Philip Ellis in the new racing series. The experienced professional had already caused a sensation at the wheel of the first KNAUS "Raptor" in 2019 and proved his talent. As the final driver in the demanding 24-hour race at the Nürburgring, the now 28 years old German-British sportsman achieved a commanding seventh place in his class at the time. In the current DTM season, he is competing in the Mercedes-AMG Team WINWARD. "Motorsports are always a combination of all forces and thus team sport par excellence," emphasises WINWARD team boss Christian Hohenadel - a philosophy that KNAUS actively supports as a partner.

Performance, the desire for success and innovation are the central values at the heart of this commitment. Gerd Adamietzki (CSO), CEO of Knaus Tabbert AG, comments: "Innovative, willing to perform, fast, these are the core virtues in motorsports - and they fit perfectly with our successful brand KNAUS. In any case, our staff is keeping all fingers crossed for the entire team.”

In what is now the 35th DTM season, a total of 16 races each lasting 55 minutes plus one lap are planned over eight race weekends. The DTM race dates on Philip Ellis' and his KNAUS "Raptor's" schedule this year are:

In national and international motorsports, KNAUS has been a successful, firmly established factor for many decades. The motorhomes with the double swallows are always extremely present, both directly in the paddocks and in the car parks where many fans camp during the race weekends.

Knaus Tabbert AG is a leading manufacturer of leisure vehicles in Europe. The company's headquarters are located in Jandelsbrunn, Germany. Additional locations in Germany include Mottgers and Schlüsselfeld as well as Nagyoroszi in Hungary. Since September 2020, the company has been listed in the Prime Standard segment on the Frankfurt Stock Exchange (ISIN: DE000A2YN504) and in 2020 generated via its brands KNAUS, TABBERT, T@B, WEINSBERG, MORELO and the internet platform RENT AND TRAVEL sales of almost EUR 800 million and with about 3,000 employees manufactured more than 24,000 recreational vehicles.
For more information: www.knaustabbert.de

Pressemitteilung The KNAUS "Raptor's" first appearance in the DTM: Start of an exciting season weiterempfehlen