"The Child of the Sun" edited by Silvia Irina Zimmermann

The book focuses on the two Romanian Queen Consorts, Elizabeth (Carmen Sylva) and Marie of Romania. Both of whom became famous - even internationally - as writers during their lifetimes 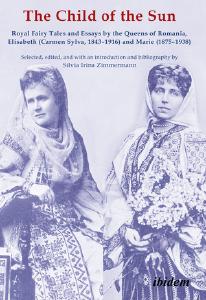 (lifePR) ( Stuttgart, 16.02.21 )
“Carmen Sylva, when she discovered that I was writing, instead of laughing at me and being ironical about my modest attempts at literature, encouraged me from the very first in every way. She was getting old, her imagination was running dry, and she declared that mine had come just in time to replace hers, which was a generous thing to say. She declared that it was a happy and blessed discovery that I could hold a pen, and no end of kind and enthusiastic things. She spurred me on to write, and each time I had finished a story she immediately wanted to have it so as to translate it into German.” Queen Marie of Romania about Carmen Sylva (Queen Elisabeth of Romania). The history of the monarchy in Romania and of its four kings would be incomplete without the story of the queen consorts, who seem to have been even more fascinating personalities than the kings were. Especially the first two queen consorts, Elisabeth (Carmen Sylva) and Marie of Romania, became famous as writers during their lifetime. They both wrote in their mother tongues, Elisabeth in German and Marie in English, and published many of their books, not only in Romania, but also abroad, thus reaching a widespread readership, worldwide publicity, and literary recognition.

”Silvia Zimmermann’s merit is a significant one, namely that of rediscovering Carmen Sylva who has not only been a creator, but also an important mediator between the Romanian and the German culture. […] Zimmermann’s substantial work is inspiring for everyone involved in the scientific research of German-Romanian cultural studies.”—Prof. Dr. Maria Sass, University of Sibiu (Romania).

Dr. Silvia Irina Zimmermann is coordinator of the Research Center Carmen Sylva of the Princely Archive of Wied. She has published several books, new editions, and studies about the life and writings of Carmen Sylva (born Princess Elisabeth of Wied, the first Queen of Romania).

From “the Ukraine” to Ukraine