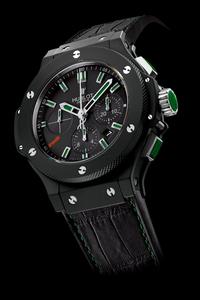 (lifePR) ( Gstaad, 05.01.11 )
THE place to be. Opened in 1971, the disco at the Gstaad Palace is one of the oldest night-clubs in the world. The club rapidly became famous for all the international jet set. Roger Moore, Elizabeth Taylor, Princess Diana, Michael Jackson, Richard Burton (left picture), Prince Rainier and Grace Kelly, David Niven, Peter Sellers, King Juan Carlos, George Soros, Jeanne Moreau, Julie Andrews, Margaret Thatcher, Johnny Holiday, Bernie Ecclestone… This list could go on and on, so intimately tied is the history of the GreenGo, the Palace's legendary night club, with the worldwide renown resort.


To celebrate the 40th anniversary of the GreenGo, the Gstaad Palace and Hublot have teamed up to create a “Big Bang” in the colours of the club – with a Black Magic base featuring the two famous green and orange colours - in an edition of just 40 pieces (for 40 years), available only at the Gstaad Palace. Our nod to history: the GreenGo logo takes its place on the dial instead of the index at 8 o'clock… or at 40 mins, representing 40 years of legendary parties. The presentation will be on 7 January 2011; at the GreenGo, naturally! It promises to be accompanied an epic, glorious celebration …

Over the years the Gstaad Palace has earned an unrivalled reputation for discreet, refined hospitality, and has always welcomed the most discerning international clientele.

Set on a hill overlooking Gstaad, the resort is privileged to offer a breathtaking view of the majestic Swiss Alps. The 104 tastefully decorated rooms include 19 junior suites, 4 suites, 2 Tower Suites and the most luxurious and sophisticated three-bedroom Penthouse Suite ever built in an Alpine resort.
Enjoy traditional Swiss dishes, savoury grill specialties, an exceptional Italian menu and exquisite gourmet cuisine at the hotel’s five superb restaurants.
Unwind in the relaxed lobby bar, the stylish Bar du Grill or the famous GreenGo nightclub.

This elegant hotel offers guests a truly memorable stay in distinguished surroundings and a relaxing ambiance – over 250 employees dedicated to fulfilling your every wish.

The Gstaad Palace also features a spa spread on 1800sqm including eight treatment rooms, a private spa suite, saunas and steam bath, relaxation areas with incredible views, indoor pool and outdoor pool with jacuzzi, a state-of-the-art gym, a pilates studio and a unique hammam experience with seven rooms. A wide variety of activities is available nearby the hotel such as golf, heli-skiing, hot-air-ballooning, etc.

Gstaad Palace - Magic in the Mountains...