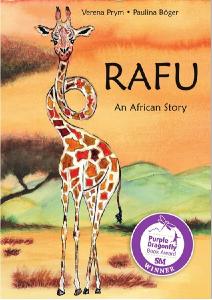 (lifePR) ( Soest, 31.07.20 )
Author Verena Prym and illustrator Paulina Böger have been inseparable from the very first second. They both share a zest for life, curiosity and creativity but express themselves in different ways: Paulina creates films, draws and illustrates while Verena develops and writes stories.

They share a passion for creating remarkable and moving stories for children. In April they self-published their first book “Rafu — An African Story” which takes young readers to the colourful world of the extraordinary giraffe Rafu.

“Rafu” is the current winner of the Silvermedal in the Purple Dragonfly Book award 2020 in the category Picture Books 6 & Older and received Honorable Mention in the category Best Illustrations.

Verena was born 1972 in Arnsberg, Germany. Having lived in South Africa, America, Austria and Munich, she is now based in the medieval city of Soest, Westphalia. Verena discovered her love for Africa when she went to Johannesburg at the age of 17 and has felt a special connection to the continent ever since. Paulina Böger was born 1998 in Koblenz, Germany. She went to school in Vienna and Munich and is currently studying business administration in Regensburg. When Verena asked her if she wanted to illustrate “Rafu”, Paulina did not hesitate for one second. With great joy and attention to detail, she has captured the colours of Africa in this newly published book.

“Rafu” is set in the bushland of Africa, the sunny continent of wild animals and the cradle of humankind. Thousands of years ago the first bushmen captured their stories in cave drawings, some of which can still be admired today in museums and in nature. The story about Rafu is based upon these magical drawings. He manages to reveal an important secret about one of them and thus becomes an ambassador for peace. The book is recommended for children from the age of six.

“Rafu” connects an old African legend with a modern story about friendship, belief in higher powers and the deep wish for a peaceful life. The book tells the story of an extraordinary giraffe, who, thanks to his friendship with a little crocodile, reveals an important secret about a cave and thus paves the way for the long-desired peace between crocodiles and giraffes.

The idea to write a children’s story came to Verena Prym during her stays in South Africa and Malawi. As well as mythical characters and the meaning of true friendship, the book deals with a problem that many parents and children experience in daily life: the fear of water. It is vital for children to be able to swim, yet to many it is a great effort to go into the water. Children are familiar with that feeling. In the book they will find it in the character of the little crocodile Dada.

“Rafu” by Vereny Prym and Paulina Böger is now available in English and German in eBook stores and in print on www.rafu.info, as well as RAFU - T-shirts for children and women. For more information, go to www.rafu.info, www.vprym.com or follow rafus_world on Instagram. The sequel to RAFU will be released in summer/autumn 2020.