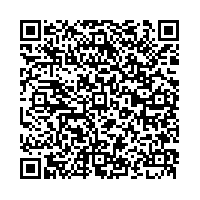 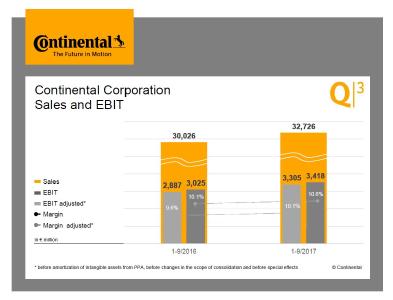 (lifePR) ( Hannover, 09.11.17 )
.
Continental successfully continued its dynamic growth in the third quarter of 2017. The technology company presented its business figures for the first nine months on Thursday, confirming its annual targets: “We are steadily continuing our successful path. After nine months, we increased our sales by 9 percent to €32.7 billion. Our adjusted EBIT margin is 10.6 percent. We are therefore completely on track and will comfortably achieve our annual targets,” said Continental’s Executive Board chairman Dr. Elmar Degenhart.

Degenhart expressed his delight over the strong sales growth: “We have put our money on the right horses with our technologies for safe, efficient and intelligent mobility. We closed the third quarter with sales growth before changes in the scope of consolidation and exchange rate effects of 8 percent. This means that we once again grew much faster than our reference markets. For example, the global market for passenger cars and light commercial vehicle production grew by just 2 percent.”

Degenhart expects the successful path to continue in the final quarter: “The fourth quarter will be another strong one, both in terms of sales and earnings.”

“In the third quarter, we generated an adjusted operating margin of 10.4 percent. This is very decent, as we achieved this despite the negative effects that have already impacted us this year from rising raw material costs,” said CFO Wolfgang Schäfer on Continental’s earnings development.

The company’s growth momentum is demonstrated in particular by the steady growth of incoming orders in the Automotive Group: “Compared to the same period of the previous year, the order intake after nine months has grown by 20 percent to total more than €30 billion,” explained Schäfer.

In the third quarter, products from the fields of electronics, software and sensor technology made a particular contribution to the Automotive Group’s growth. “Their share is growing continuously. They accounted for about 50 percent of the Automotive Group’s sales in 2012 – now the figure is at above 60 percent and rising,” said Schäfer.

“The Rubber Group increased its sales further in the third quarter despite a weak market environment. That is remarkable. The price increases for tires and industrial products from the first half of the year have generated their positive effect. At the same time, the earnings in the third quarter were burdened by more than €100 million from increased cost of raw materials,” Schäfer explained. Continental continues to estimate the negative effect of rising raw material prices for the Rubber Group in fiscal 2017 at €450 million. The recent development of raw material prices will not take effect until fiscal 2018.

“The winter tire business is off to a good start,” reported Schäfer. He is also pleased with the latest winter tire, the WinterContact TS 860. It once again earned outstanding scores in tests by all major automobile clubs in Germany, Austria and Switzerland.

The ContiTech division has also grown strongly again. Schäfer is content with the integration and performance of the surface specialist Hornschuch, which the company acquired in March 2017: “Hornschuch is meeting all of our expectations completely.”

In the first three quarters of 2017, Continental achieved free cash flow of €472 million and was thus €712 million short of the previous year’s figure. “We reconfirm our forecast of achieving free cash flow of around €2 billion before acquisitions at the end of the year despite the high capital expenditure required for securing our strong growth. In the fourth quarter in particular, we expect a sharp decline in working capital, which after nine months expanded by €660 million year-on-year due to our excellent growth,” Schäfer explained, adding that the growth in working capital was the main reason for the decline in free cash flow after nine months.

In the first nine months of 2017, capital expenditure on property, plant and equipment and software increased by 12 percent year-on-year to €1.8 billion. As a result, the capital expenditure ratio amounted to 5.5 percent after 5.3 percent in the comparative period of the previous year.

As at September 30, 2017, Continental had a liquidity buffer of just under €5.2 billion, comprising more than €1.5 billion in cash and cash equivalents and more than €3.6 billion in committed, unutilized credit lines.

As at the end of the third quarter of 2017, the corporation had more than 233,000 employees, over 13,000 more than at the end of 2016. In the Automotive Group, the number of employees rose primarily in production and in research and development. Overall, there was an increase of more than 7,400 employees here. In the Rubber Group, further expansion of production capacity and sales channels, as well as the acquisition of the Hornschuch Group, led to an increase of more than 5,700 employees. Compared with the reporting date for the previous year, the total number of employees in the corporation was up by almost 14,700. Continental develops pioneering technologies and services for sustainable and connected mobility of people and their goods. Founded in 1871, the technology company offers safe, efficient, intelligent, and affordable solutions for vehicles, machines, traffic, and transportation. In 2016, Continental generated sales of €40.5 billion and currently employs more than 233,000 people in 56 countries.