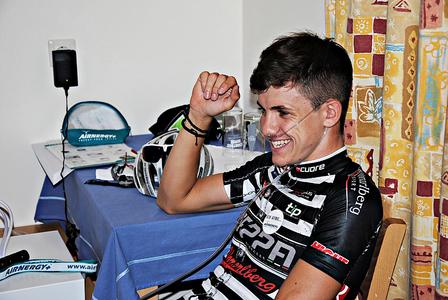 (lifePR) ( Rankweil/Hennef, 27.06.12 )
Thomas Kofler established the Team Vorarlberg and he was the team manager up until 2010. Since then he has been the Company Director of Pro Event Cycling Sports GmbH. The well-being of the team is everything. Thomas Kofler knows a lot about cycle racing. He has himself been an active amateur rider and he knows how important fitness is to a cyclist.

On 17 June they rode to victory: The Tour of Upper Austria is one of the most important multi-day races in the country, second only to the Tour of Austria. And, according to Kofler, the team has shown that it is the best team in Austria at the moment for, with a strong team performance, Robert Vrecer was the overall winner of this tour and secured this by taking 6th place in the last stage.

A few days beforehand the team had started to use Airnergy oxygen technology. As did the team of AMG Mercedes DTM drivers one month ago: http://www.airnergy.com/...

Keyword: Optimal oxygen utilisation, rapid regeneration, relaxing and relaxation. And this is what the racing cyclists also found after the first few test treatments.

Josef Benetseder / born 1983 Austria, said after the final stage of the Tour of Upper Austria, in which the riders had to contend with extremely stifling heat: "Over the last few days I have been breathing Airnergy and today I could breathe better than I have done in a long time."

Rene Weissinger / born 1978 Germany: "I have already spoken with several specialists and they all recommended it to me. Because it is about energy or rather energy flow, I am very interested to test how it works. Then I will be happy to give feedback. What I can already say subjectively at this stage is that it helps to kick-start the regeneration process."

Robert Vrecer / born 1980 Slovenia: "The principle sounds good and I am going to try to test the device over the next few weeks - then I'll let you know."

Dominik Hrinkow / born 1988 Austria: "I have been breathing Airnergy every day before and after the stage during the Tour of Upper Austria and I think it helps with regeneration. It's great. I am a convert."

Airnergy catalysts are being used throughout the world, in Germany, Europe, the USA, the Middle East and the Far East. By committed doctors and in progressive clinics, in health-oriented wellness and fitness facilities, by competitive athletes and private users. Even companies are using regular Airnergy treatments to enhance the well-being and performance of their employees. Airnergy AG, which has been active since the end of 2007, owns the patent and the technology and operates rigorous quality, service, production and business management.

The Company's objective is to extend the range of applications of Airnergy. Because it is a basic technology, Airnergy can also be used in many other areas, for example in air-conditioning and ventilation systems, in motor vehicles and aircraft and in buildings.