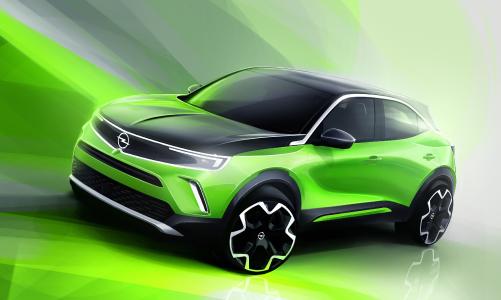 (lifePR) ( Rüsselsheim, 25.11.20 )
It all started with an idea. Of a completely new Opel with a fresh new face – bold, pure, efficient, electric. With room for five passengers – and yet so compact that the newcomer takes up very little (road) space. The maxim of the team around Opel Design Vice President Mark Adams for the new Mokka and for the brand’s future design was “reduce to the essentials”, from the first stroke of the pen. In a new video, members of the exterior design team talk about the philosophy.

“The new Mokka is a head turner and will change the perception of our brand! With the Mokka, we are reinventing Opel and introducing our design of the next decade. It shows everything the brand stands for today and in the future: the Mokka is fun, efficient and innovative in all respects,” says Opel CEO Michael Lohscheller.

The sketches of the team from Rüsselsheim show how the new Mokka generation has developed. The designers have consistently pursued their concept, inspired by the idea of combining bold proportions and pure, precise shapes with innovative technologies. Design Vice President Mark Adams and his team have developed a philosophy for the characteristic German Opel design that combines clarity with powerful expressiveness. Every familiar function and every component in the Opel Mokka was looked at, always with the aim of creating a clear design that dispenses with all unnecessary elements.

In the video, two designers, Niels Loeb and Jil Nixdorff, use new Augmented Reality (AR) filters that were launched for Instagram and Facebook to digitally showcase the bold graphics they created for the Mokka. For example, the black engine hood is much more than just a reminiscence of legendary Opel models from the past such as the Manta A or the Kadett C.

In the video, designers also show how the Mokka is the first model to show Opel’s new, unmistakable brand front fascia: the Opel Vizor. Extending across the entire front of the vehicle below the bonnet, the Opel Vizor is an elegant module that horizontally frames brand features such as the latest-generation IntelliLux LED® matrix headlights and the typical wing signature of the LED daytime running lights, proudly punctuated in its centre by the legendary Opel Blitz. The Opel Vizor invented by the team around design chief Mark Adams will be featured on all of the brand's models throughout the 2020s.

“Bold and pure, this is what the Opel design of the future will look like. The new Mokka shows athletic proportions combined with precisely structured, flowing surfaces. We have developed this philosophy aligned to characteristic German design, combining progressive bold design with purity,” explained Opel Design Vice President, Mark Adams.

Opel is one of the largest European car manufacturers and was founded by Adam Opel in Rüsselsheim, Germany, in 1862. The company started building automobiles in 1899. Opel has been part of the Groupe PSA since August 2017. Together with its British sister brand Vauxhall, the company is represented in more than 60 countries around the globe selling around one million vehicles in 2019. Opel is currently implementing its electrification strategy to secure sustainable success and ensure that the future mobility demands of customers are met. By 2024, all Opel models will offer an electric variant. This strategy is part of the company plan PACE! with which Opel will become sustainably profitable, global and electric.