Drawn by the Glitter of Gold 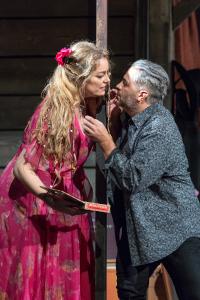 Puccini set this, his seventh opera, in a gold mining camp in the Wild West. Loneliness and isolation define the miners’ raw, masculine existence, ruled as it is by a clearly defined pecking order. Here, far from home and hearth, the men’s search for gold becomes a search for true meaning in life. Surrounded by the miners, Minnie the barmaid (Meagan Miller) is the personification of hope for a new life. For Sheriff Jack Rance (Simon Neal) and the gold miners, she embodies their hopes and dreams. But then a stranger with a dark past arrives (Gaston Rivero as Dick Johnson), threatening the camp’s order.

La fanciulla del West (The Girl from the Golden West) was commissioned by the Metropolitan Opera in New York, and was premiered there in 1910. As he did with La Bohème and Madame Butterfly, Puccini creates a richly contoured world for his Wild West opera, complete with its own atmospheric musical idiom. With La fanciullad del West, Puccini innovated with a through-composed, large-scale musical form, in which he moved seamlessly from duets to musical dialogue. In doing so, he distanced himself from traditional Italian opera and focusing more on the psychological expressiveness of his music.

Director Cusch Jung, the principal stage director of Leipzig’s Musikalische Komödie, was handpicked by Intendant and music director Prof. Ulf Schirmer to spearhead this production of La fanciulla del West (The Girl from the Golden West). It marks Jung’s directorial debut at the Opera House. Meagan Miller, who has already celebrated international success as Minnie, appears in the title role. The American soprano last appeared in Leipzig in 2018 as Sieglinde in Die Walküre. Simon Neal (whom audiences in Leipzig met this past spring when he thrilled audiences as Dr. Schön in Lulu) and Gaston Rivero (last seen in Leipzig breaking hearts in Don Carlo), will both debut new roles.

Pressemitteilung Drawn by the Glitter of Gold weiterempfehlen