Creative car design for the benefit of Aids Life 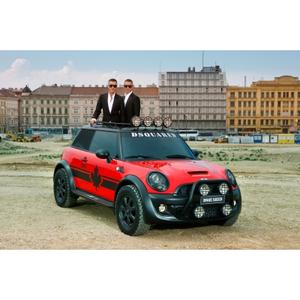 (lifePR) ( Munich/Vienna, 23.05.11 )
Dean and Dan Caten, better known as the Canadian designer duo DSQUARED², today unveil their exclusive Life Ball MINI 2011 in Vienna. The twin brothers refashioned their MINI Cooper S to ensure that it would be armed for adventures of all kinds. Among its striking features are the front guard, rally headlamps, tinted side windows with grilles and the spare tyre on the tailgate. But that's not all: the vehicle's raised chassis and deep-tread all-terrain tyres instantly evoke a sense of adventure. When it came to the interior, our two designers similarly scrutinised every detail. If road signs are unclear, there's a compass to help you head in the right direction, while floormats made of structured aluminium sheeting protect the inside from dirt. The trademark DSQUARED2 maple leaf on the leather head restraints and the side doors rounds off the cabin of this robust MINI with a stylish flour. Dean and Dan are delighted with the result: "Our MINI 'Red Mudder' is 100 per cent DSQUARED²." Tonight this one-off will be gliding along the red carpet at the legendary Life Ball.

This year sees carmaker MINI supporting Europe's biggest AIDS charity event for the 11th time. Each year a one-off MINI is created for the Life Ball, the proceeds of which support projects combating HIV/AIDS. Since 2001 more than half a million euros has been generated by these specially styled Life Ball MINI models on behalf of Aids Life. Gery Keszler, the founder and organiser of the Life Ball, is impressed by this longstanding collaboration: "MINI has been a partner of the Life Ball for 11 years and each year it demonstrates anew its creativity, enthusiasm and passion for this good cause. This year's Life Ball MINI designed by DSQUARED² provides further persuasive evidence of this." In previous years, designers such as Agent Provocateur, Donatella Versace, Diesel, Missoni and Gianfranco Ferré obliged with their own designs for a Life Ball MINI.

The social commitment of the BMW Group.

Worldwide measures to combat HIV/AIDS are one of the main elements of the corporate and social policy pursued by the BMW Group. The company's involvement in South Africa is particularly wide-ranging, covering a comprehensive workplace programme for employees and their families, plus a number of different projects in the local communities and further afield. The carmaker is also committed to fighting this pandemic in other affected countries, such as Thailand or China. Membership of the Global Business Coalition on HIV/AIDS (GBC) underlines its long-term commitment at its various locations.