A Name Becomes a Trademark: 90 Years of the Opel Blitz 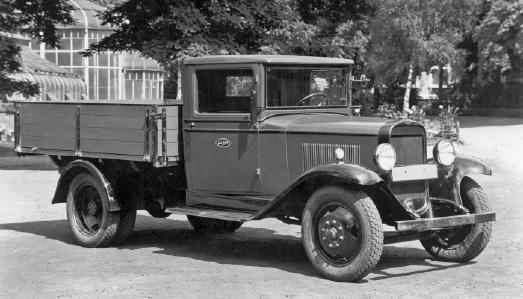 (lifePR) ( Rüsselsheim, 29.10.20 )
Ninety years ago, the “Blitz” truck laid the foundation for a long line of successful Opel commercial vehicles. At the same time, the model name became the world-famous symbol that still characterises the brand today. While six-cylinder petrol engines with 55hp once purred under the long bonnet of the commercial vehicle, much has changed since then: the current Opel vans boast highly efficient direct-injection diesel engines with up to 180hp – in addition to comfort, safety and braking power at passenger car level. Today's heroes are known by the names Combo, Vivaro and Movano; the last Opel with the Blitz nameplate went into well-deserved retirement in 1987. By the end of the Blitz model line, almost half a million vehicles had been built at the plants in Rüsselsheim, Brandenburg and Luton. Then as today, Opel commercial vehicles are economical, safe and durable companions for the transport of all types of loads.

The origins of commercial vehicles at automotive pioneer Opel date back to 1899. Delivery and transport vans were already built early on, based on the Patent Motor Car “System Lutzmann”, the first automobile made in Rüsselsheim. In 1907, the first fully-fledged truck was added to the portfolio. The three-quarter tonne vehicle had pneumatic tyres and a propeller shaft drive as standard and was available with either a two or four-cylinder engine. During the first world war, norms specifying “standard trucks” of up to four tonnes were introduced by the military. The robust Opel “standard trucks” were sold until the early 1920s. From 1923, a new range of commercial vehicles was created, consisting of smaller light trucks with a payload of one to two tonnes.

Another generation of modern commercial vehicles was on the starting blocks for the 1931 model year. The engineers did a great job in economically hard times, presenting newly developed “express transport trucks” with excellent design. As a sales promotion measure, the Opel advertising department was to create a concise term that could be pronounced in German as well as “in any modern language”. And it was to only have five letters – that was a must! The Opel advertisers chose an unusual, but extremely high-profile and effective way of finding a name: the name for the new product was sought throughout Germany by means of a competition. “Win an Opel! We are looking for a name that we want to make famous all over the world! The new truck is to set off on its successful career in Germany and beyond its borders under a name that identifies it as a German make and is also an expression of its superior quality,” wrote Dr. Wilhelm von Opel in full-page newspaper advertisements. The grand prize was a 4/20 hp limousine while four Opel Motoclub motorbikes were the second to fifth prizes. The closing date for entries was October 6, 1930, and Sales Manager Andersen announced the winner at the Opel Dealer Conference on November 24, 1930 in Frankfurt's "Ufa-Palast". “Blitz” was chosen from about 1.5 million entries. A term that had already been used for Opel bicycles from 1889 and was now to stand for Opel commercial vehicle construction for the next six decades. For Dr. Wilhelm von Opel, it was a name "which equally symbolizes the origin, power and performance of our new product".

Performance was also a major theme at the presentation of the newly christened Opel Blitz: two basic models with a payload of 1.5 to two tonnes, three different wheelbases and two engines met customers’ individual wishes. The promise of being a true “express transport truck” was fulfilled by a 2.6-litre four-cylinder and, in the case of the Blitz “6”, a 3.6-litre “Marquette” six-cylinder engine. In the following years, the range was constantly refined – with success: the career of the new Blitz trucks was so overwhelming that five years after their debut, the company built a plant specifically for commercial vehicle production.

As the plant at Rüsselsheim headquarters was operating at full capacity, Opel expanded in Brandenburg an der Havel. On April 7, 1935, the ground-breaking ceremony for the new production facility in state-of-the-art industrial architecture covering 850,000 square metres and designed exclusively for truck manufacturing took place. It was the first Opel plant designed solely for assembly line production.

In July 1937, the 25,000th Blitz express transport truck left the assembly line in Brandenburg. The same year, Opel updated its engine portfolio with units from passenger car production. The three-tonne truck was fitted with the modern 3.6-litre six-cylinder engine from the Opel Admiral, which had overhead valves and a spur gear-driven camshaft. It developed 75hp in the Opel Blitz, which, with a top speed of 90km/h, was now faster than many a passenger car. The 1.5-litre four-cylinder OHV from the Opel Olympia with 37hp was used in the 80km/h one-tonne car. Solid, reliable, durable – the Blitz had the proverbial Opel virtues.

In 1945, ten years after the inauguration of the new plant, the Blitz production in Brandenburg came to a standstill. The building structure was destroyed after heavy air raids, and the remaining production facilities were dismantled and sent to the Soviet Union as reparations. The Kadett lines in Rüsselsheim suffered the same fate. While the Kadett was then built as the “Moskvich” in Moscow, the Blitz facilities were never reassembled again.

The new beginning at the Rüsselsheim main plant was with a truck: the first post-war Opel was a Blitz. “On Monday, July 15, 1946, a simple ceremony was held to celebrate re-starting series production of the 1.5 tonne, six-cylinder, 2.5-litre Opel Blitz fast transport truck, which signalled the resumption of series production of motor vehicles at Adam Opel AG,” said the news at the time. As a symbolic act of the restart, the commanding general of the 3rd US Army, Geoffrey Keyes ceremonially cut a yellow ribbon. The platform truck ordered by a Wiesbaden businessman cost 6,600 marks. Compared to the previous version, the gross vehicle weight was increased by 200 to 3,400 kilogrammes and payload grew to 1,725 kilogrammes. Under its characteristic bonnet, the OHV six-cylinder engine familiar from the Kapitän now had 55hp. 839 Blitz fast transport trucks were produced to the end of 1946, and by the time production was discontinued in December 1951, the total reached 37,117 units.

The big brother of the 1.5-tonne vehicle, the three-tonne truck, had already been produced exclusively by Daimler-Benz since August 1944. Manufactured under license as the L 701, the Blitz rolled off the assembly line at the Mannheim plant – initially with a greatly simplified “standard cab”, then from 1948 again with the original cab supplied by Opel from Rüsselsheim. In 1949 the L 701 successor was introduced and Opel took over all unsold cars and all remaining parts. Until 1954 the last 467 units of the famous truck were produced in Rüsselsheim – now again under its original name and with the Blitz logo on the front.

The truck for the economic miracle

Thanks to its fresh design, the 1.75-tonne replacement of the 1.5-tonne Blitz was popular throughout Europe. The wide grille and the shapely fenders were skilful adaptations of typically 1950s American form language, while the cabin was made of steel. The smooth-running, 2.5-litre six-cylinder limousine engine stood out from the typically rustic motors on the truck market. Increased load capacity made the 1955 model particularly special: with a payload of two tonnes, the Blitz could transport more than it weighed. Specialists supplied conversions for buses, removals, deliveries and the fire brigade, based on the 3,300 or 3,750mm-long platforms. Around 20,000 units of the so-called “Rundschnautzer” (round-nose) left the plant every year. By the time of the 1960 model change, production had totalled 89,767 vehicles.

The Blitz generation for the swinging sixties featured a new 2.6-litre six-cylinder engine as well as a shorter, downward sloping hood. Aficionados described the design of the panel van version as subtly elegant and especially effective. With the Rüsselsheim plant operating at full capacity, the cabin and the cargo structure were produced externally by coachbuilder Voll.

The Blitz appeared at the 1965 IAA with a comprehensive makeover – the cabin displayed a more expressive front with extra emphasis of horizontal lines. A 70hp four-cylinder power unit joined the line-up. This 1.9-litre petrol engine featured a chain-driven camshaft-in-head and originated from a new generation that had debuted in 1965 in the Opel Rekord B. In 1966, the 2.1 and 2.4-tonne variants got a new straight-six that powered the Blitz to a top speed of 110km/h. At the end of the sixties, the Opel Blitz was still one of the most popular light trucks on the German market; nearly one in two petrol trucks up to three tonnes gross vehicle weight (GVW) was an Opel. The company took another important step in 1969, adding a diesel to the petrol range – Opel produced 47,368 petrol and 7,374 diesel trucks between 1965 and 1975.

Production of the Blitz truck in Germany ended on January 10, 1975. After 417,211 units built in Rüsselsheim and Brandenburg, the model that gave its name to the Opel emblem left the portfolio. The name itself, however, remained; a neat compact van had joined the Opel commercial vehicle range just two years earlier, in March 1973 – the Opel Bedford Blitz.

The little truck from Luton

Opel concentrated on passenger cars in the 1970s and relocated the production of commercial vehicles to the Luton plant in England. Powered by frugal Opel diesels and lively Vauxhall petrol engines, the Opel Bedford Blitz was a convincing concept: engine in front of the driver, driving wheels under the cargo area, McPherson strut front suspension, car-like handling. With its unitary body, level load surface, big doors and compact instrument panel, the vehicle attracted a lot of praise. The Opel Bedford Blitz was especially popular as the basis for campers and reached market shares of more than 20 per cent.

At this time, Opel also offered heavy Bedford trucks (up to 10.2 tonnes gross vehicle weight) under the Blitz nameplate.

With its refreshed design and new 2.3-litre diesel engine, the Bedford Blitz represented the backbone of Opel’s commercial vehicle range from 1980 to 1987. At the end of production, the “Blitz” nameplate retired after 57 years of active duty. With the famous Blitz emblem, however, the tradition lives on in every Opel.

Comeback with a new name

After a 10-year pause, Opel made a successful return to panel vans in 1997 with the Arena. With their numerous variants, pioneering light technology, connectivity and high-tech assistance systems, the Combo Cargo, Vivaro and Movano continue the great tradition of the Opel Blitz today.

Opel recently expanded its offer of especially efficient LCVs with the all-electric Vivaro-e. Thanks to the Combo-e and an electric version of the Movano, the range will become fully electrified next year. All Opel models will have an electrically driven version by 2024.

Pressemitteilung A Name Becomes a Trademark: 90 Years of the Opel Blitz weiterempfehlen